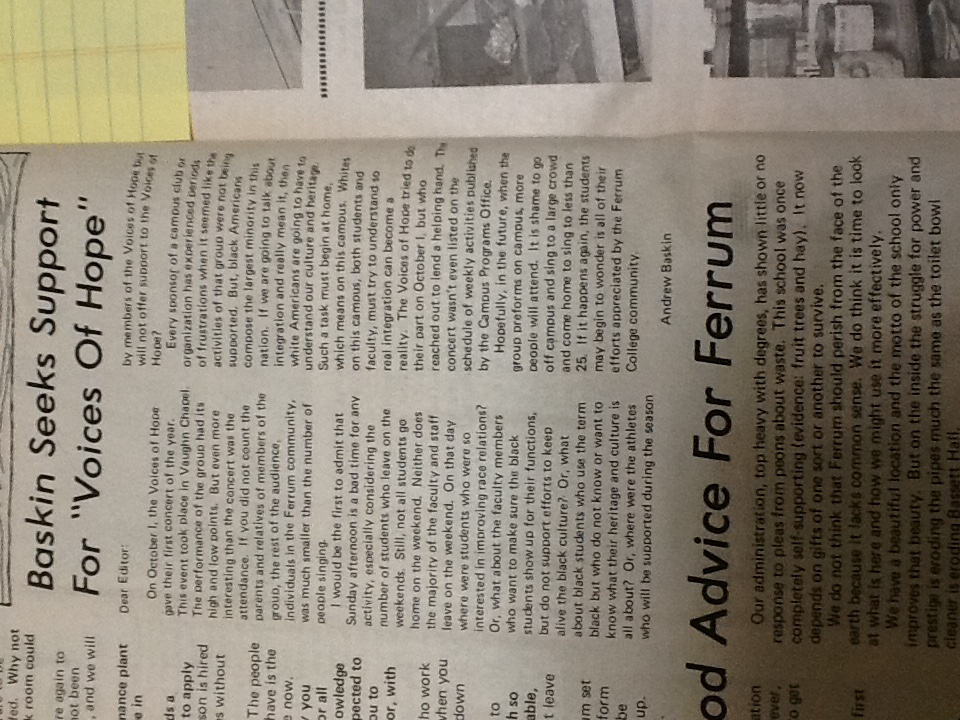 Dear Editor
On October 1, the Voices of Hope gave their first concert of the year. This event took place at Vaughn Chapel. The performance of the group had its high and low points. But even more interesting than the concert was the attendance. If you did not count the parents and relatives of members of the group, the rest of the audience was much smaller than the number of people singing.

I would be the first to admit that Sunday afternoon is a bad time for any activity, especially considering the number of students who leave on the weekends. Still, not all students go home on the weekends. Neither does the majority of the faculty and staff leave on the weekend. On that day where were students who were so interested in improving race relations? Or, what about the faculty members who want to make sure the black students show up for their functions, but do not support efforts to keep alive the black culture? Or, what about black students who use the term black but who do not know or want to know what their heritage and culture is all about? Or, where were the athletes who will be supported during the season by members of the Voices of Hope but will not offer support to the Voices of Hope?

Every sponsor of a campus club or organization has experienced periods of frustration when it seemed like the activities of that group were not being supported. But, black Americans compose the largest minority in this nation. If we are going to talk about integration and really mean it, then white Americans are going to have to understand our culture and heritage. Such a task must begin at home, which means on this campus. Whites on this campus, both students and faculty, must try to understand so real integration can become reality. The voices of Hope tried to do their part on October 1, but who reached out to lend a helping hand. The concert wasn’t even listed on the schedule of weekly activities published by the Campus Programs Office.

Hopefully, in the future, when the group performs on campus, more people will attend. It is a shame to go off campus and sing to less than 25. If it happens again, the students may begin to wonder is all of their efforts appreciated by the Ferrum College community.