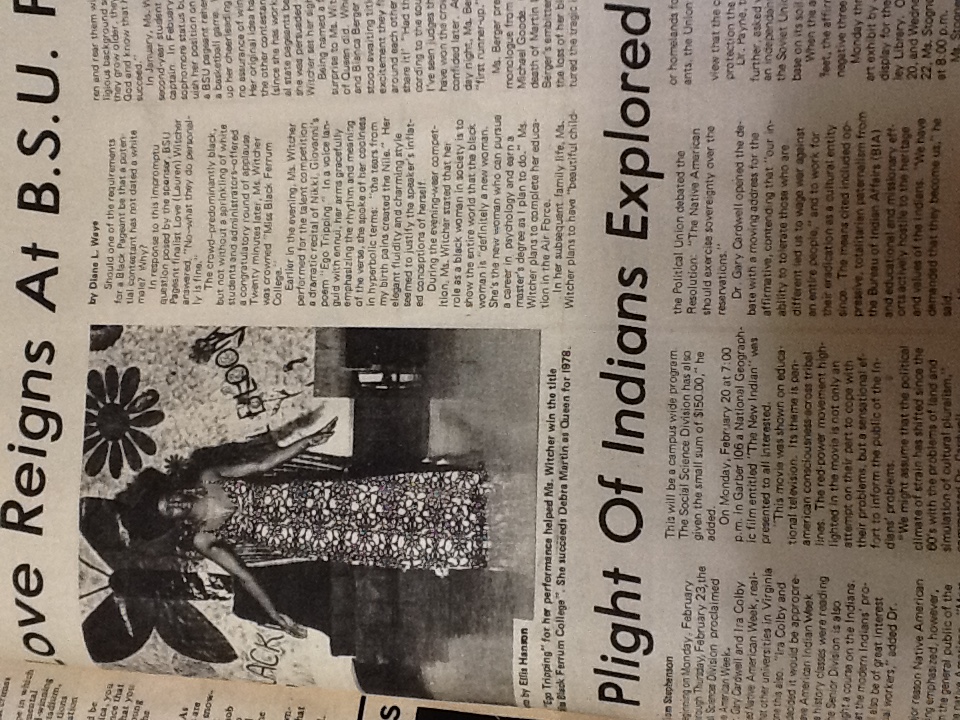 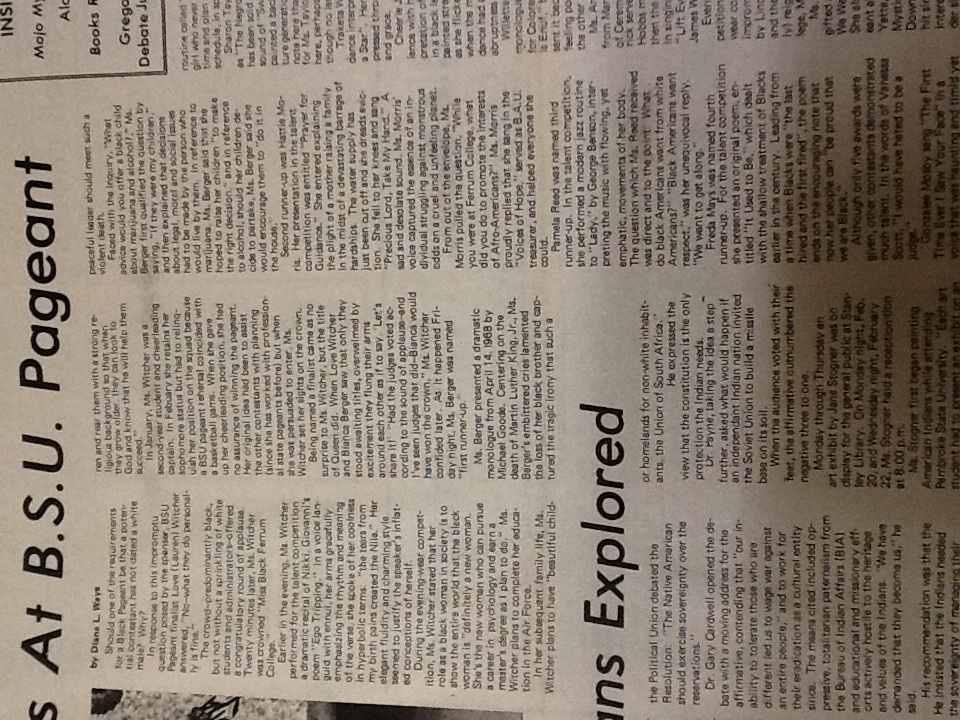 Should one of the requirements for a Black Pageant be that a potential contestant has not dated a white male? Why? In response to this impromptu question posed by the sponsor, BSU Pageant finalist Love (Lauren) Witcher answered, “No-what they do personally is fine. The crowd-predominantly black, but not without a sprinkling of white students and administrators-offered a congratulatory round of applause. Twenty minutes later, Ms. Witcher was crowned “Miss Black Ferrum College.” Earlier in the evening, Ms. Witcher performed for the talent competition a dramatic recital of Nikki Giovanni's poem “Ego Tripping.”

In a voice languid with ennui, her arms gracefully emphasizing the rhythm and meaning of the verse, she spoke of her coolness in hyperbolic terms: “the tears from my birth pains created the Nile.” her elegant fluidity and charming style seemed to justify the speaker’s inflated conceptions of herself. During the evening-wear competition, Ms. Witcher stated that her role as a black woman in society is to show the entire world that the black woman is “definitely a new woman. She’s the new woman who can pursue a career in psychology and earn a master’s degree as I plan to do.”

Ms. Witcher plans to complete her education in the Air force. In her subsequent family life, Ms. Witcher plans to have “beautiful children and rear them with a strong religious background so that when they grow older, they can look to God and know that he will help them succeed.” In January, Ms. Witcher was a second-year student and cheerleading captain. In February she retains her sophomore status but had to relinquish her position on the squad because a BSU Pageant rehearsal coincided with a basketball game. When she gave up her cheerleading position, she had no assurance of winning the pageant. Her original idea had been to assist the other contestants with planning (since she has worked with professional state pageants before) but when she was pursued to enter, Ms. Witcher set her sights on the crown.

Being named a finalist came as no surprise to Ms. Witcher, but the title of Queen did. When Love Witcher and Bianca Berger saw that only they stood awaiting titles, overwhelmed by around each other as if to say, ‘Let’s share it!’ “Had the judges voted according to the sound of applause-and I’ve seen judges that did-Bianca would have won the crown,” Ms. Witcher confided later. As it happened Friday night, Ms. Berger was named “first runner-up.” Ms. Berger presented a dramatic monologue from April 14, 1968 by Michael Goode. Centering on the death of Martin Luther King, Jr. Ms. Berger’s embittered cries lamented the loss of her black brother and captured the tragic irony that such a peaceful leader should meet such a violent death.

Faced with the inquiry, “What advice would you offer a black child about marijuana and alcohol?” Ms. Berger first qualified the question by saying, “If they were my children,” and then explained that decisions about legal, moral and social issues had to be made by the person who would live by them. In reference to marijuana, Ms. Berger said that she hoped to raise her children “to make the right decision,” and in reference to alcohol, should her children decide to partake, Ms. Berger said she would encourage them to “do it in the house.”

Second runner-up was Hattie Morris. Her presentation in the talent competition was entitled “Prayer for Guidance.” She entered explaining the plight of a mother raising a family in the midst of a devastating barrage of hardships. The water supply has been cut off to her knees and she dreads eviction. She fell to her knees and sang “Precious Lord, take My Hand.” A sad and desolate sound, Ms. Morris' voice captured the essence of an individual struggling against monstrous odds on a cruel and unfeeling planet.

From out of the envelope, Ms. Morris pulled the question, “While you were at Ferrum College, what did you do to promote the interests of Afro-Americans?” Ms. Morris proudly replied that she sang in the “Voices of Hope,” served as B.A.U. treasurer, and helped everyone she could. Pamela Reed was named third runner-up. In talent competition, she performed a modern jazz routine to “Lady,” by George Benson, interpreting the music with flowing, yet emphatic, movements of her body.

The question which Ms. Reed received was direct and to the point: “What do black Americans want from white Americans?” “Black Americans want respect,” was her unequivocal reply. “We want to get along.” Freda Mays was named fourth runner-up For the talent competition she presented an original poem entitled “It Used to Be,” which dealt with shallow treatment of Blacks earlier in the century. Leading from a time when Blacks were “the last hired and first fired,” the poem ends on the encouraging note that now her people can “be proud that we are Black.”

Although only five awards were given, other contestants demonstrated much talent. In the words of Vanessa Scott, “I would have hated to be a judge.” Gonzalee Mosby sang “The First Time I Ever Saw Your Face” in a voice that was haunting and timid yet vibrant. Vanessa Scott presented an original monologue called “Ferrum in My Young Days,” which reflected on good times in a light of vein of comedy. Dressed for parading, Dawn Redd performed a modern baton routine to “We.” Timing and control were well organized into a smooth performance as the high-stepping lady demonstrated her skill.

Denise Mitchell performed a comedy routine called “Time” about a little girl who never seemed able to organize time and plan in accordance with her schedule, in spite of a new watch. Sharon Taylor spoke of her plight as “The Negroe Mother” whose family has been sold away from her while the sound of “Swing Low, Sweet Chariot” painted a backdrop of hope for future generations. It is interesting to note here that Gonzalee Mosby sang for Ms. Taylor’s presentation also and here, perhaps, her voice was less shy, though no less moving. Traketa Wray performed a modern dance interpretation was expressed through subtlety of motion and grace.

Cheerie Johnson stunned the audience with her free-style dance interpretation of “Flashlight.” Appearing in a black leotard, her fluorescent painted streaks glowed psychedelicallyas she flicked on the flashlight beam when the music called for it. The dance had a quick pace with much abruptness of action. Willette Thompson had prepared a monologue from the play “Suicide for Colored Girls when the Rainbow is Enuf,” but she was unable to present it because of illness. In spite of feeling poorly, she attempted to cheer the other contestants. Ms. Angela Kirby, a sophomore from Martinsville, served as Mistress of Ceremonies while Mr. Ronald Patrick served as Master. Chaplin Herbert Hobbs made the introduction and then the contestants led the audience in singing the Black National Anthem, “Lift Every Voice and Sing,” by James Weldon Johnson.

Events included sportswear competition; talent competition; evening wear competition; finalist answering impromptu questions; entertainment by Linda Tyler and Mojo Mystique; and the presentation of the (previously) reigning Miss Black Ferrum College, Ms. Debra Martin. Ms. Tyler spoke of being young, gifted and Black and sang “The Way We Were” in a full blossomed voice. She also helped to organize the pageant along with Felicia Hayden, Lyda Yette, and Mrs. Symedar Baskin. Mojo Mystique performed a version of “Low Down” which was very true to the interesting to watch with Laird Trader singing lead.

Traces of added brass were sensed in “Low Down,” however, the jazz sound filled the auditorium as Mojo played the innovative instrumental, “Monique.” (Mark Hawkins, guitarist, is the composer) Four individuals served as judges Debbie Carter from Christiansburg; William Weldon from Abbington; Mae Roi Ramsey of Franklin County Middle School; and Billy Hardee of the N.Y. Jets.