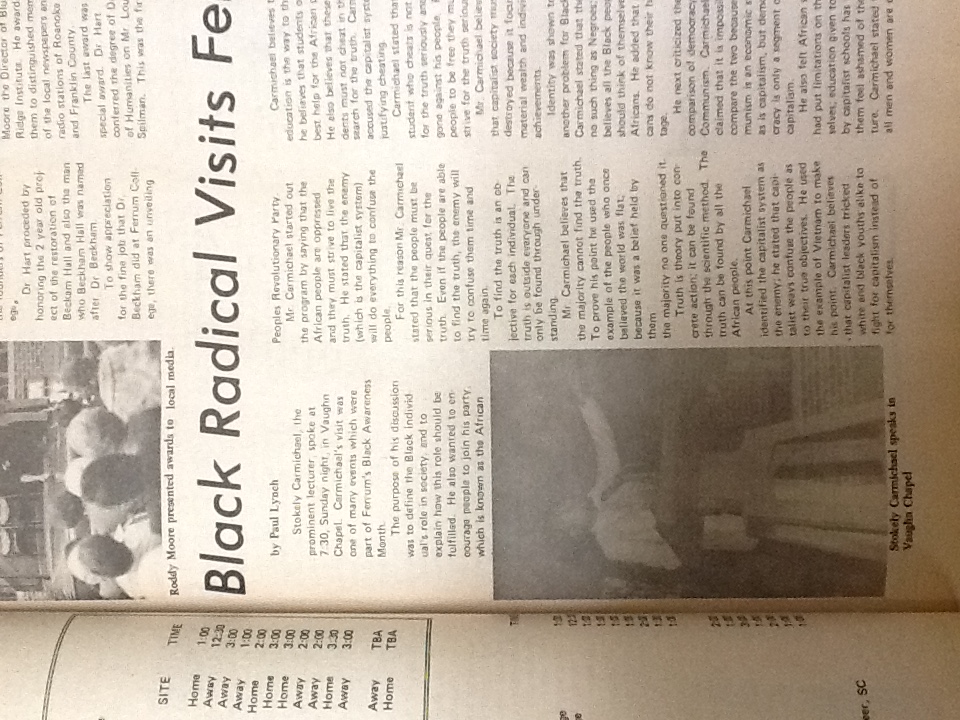 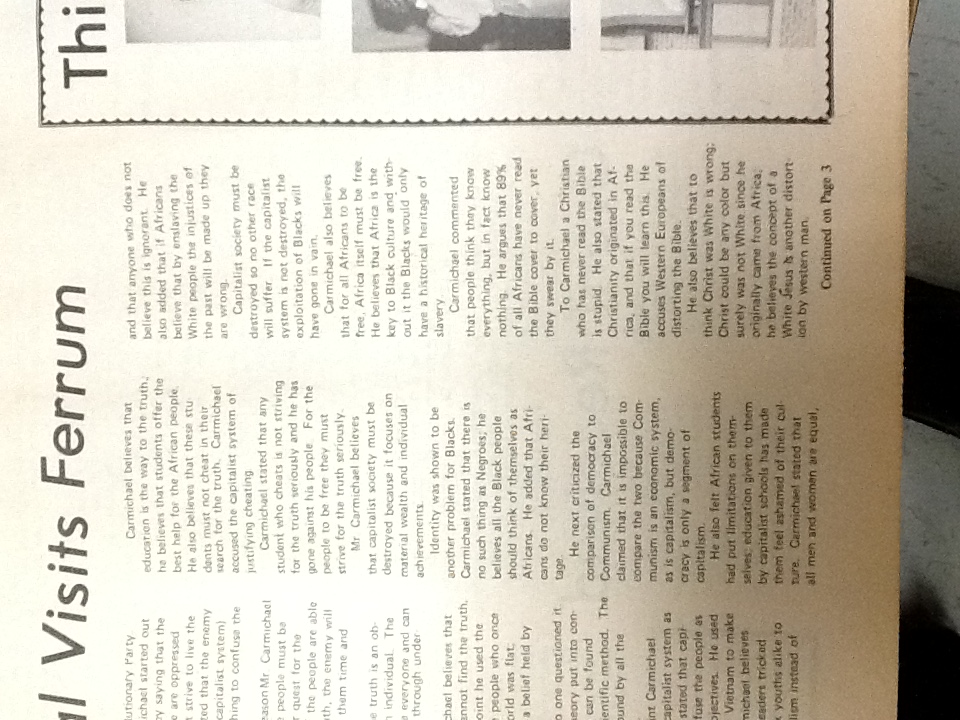 Stokley Carmichael, the prominent lecturer, spoke at 7:30, Sunday night, Vaughn Chapel. Carmichael’s visit was one of many events which were part of Ferrum’s Black Awareness Month. The purpose of his discussion was to define the Black individual’s role in society, and to explain how this role should be fulfilled. He also wanted to encourage people to join his party, which is known as the African People's Revolutionary Party.

Mr. Carmichael started out the program by saying that the African people are oppressed and they must strive to live the truth. He stated that the enemy (which is the capitalist system) will do everything to confuse the people. For this reason Mr. Carmichael stated that the people must be serious in their quest for the truth. Even if the people are able to find the truth, the enemy will try to confuse them time and time again. To find the truth is an objective for each individual. The truth is outside everyone and can only be found through understanding.

Mr. Carmichael believes that the majority cannot find the truth. To prove his point he used the example of the people who once believed the world was flat; because it was a belief held by them the majority no one questioned it. Truth is theory put into concrete action; it can be found through the scientific method. The truth can be found by all the African people. At this point Carmichael identified the capitalist system as the enemy; he stated that capitalist ways confuse the people as to their true objectives. He used the example of Vietnam to make his point.

Mr. Carmichael believes that capitalist society must be destroyed because it focuses on material wealth and individual achievements. Identity was shown to be another problem for Blacks. Carmichael stated that there is no such thing as Negroes; he believes all the Black people should think of themselves as Africans. He added that Africans do not know their heritage. He next criticized the comparison of democracy to Communism. Carmichael claimed that it is impossible to compare the two because Communism is an economic system, as is capitalism, but democracy is only a segment of capitalism. He also felt African students had put limitations on themselves; education given to them by capitalist schools has made them feel ashamed of their culture.

Carmichael stated that all men and women are equal, and that anyone who does not believe this is ignorant. He also added that if Africans believe that by enslaving the White people the injustices of the past will be made up they are wrong. Capitalist society must be destroyed so no other race will suffer. If the capitalist system is not destroyed, the exploitation of Blacks will have gone in vain. Carmichael also believes that for all Africans to be free, Africa itself must be free. He believes that Africa is the key to Black culture and without it the Blacks would only have a historical heritage of slavery. Carmichael commented that people think they know everything, but in fact know nothing. He argues that 89% of all Africans have never read the Bible cover to cover, yet they swear by it.

To Carmichael a Christian who has never read the Bible is stupid. He also stated that Christianity originated in Africa, and that if you read the Bible you will learn this. He accuses Western Europeans of distorting the bible. He also believes that to think Christ was White is wrong; Christ could be any color but surely was not White since he originally came from Africa; he believes the concept of White Jesus is another distortion by western man. Carmichael believes a revolution is coming to destroy capitalism. He claims this revolution is unstoppable; it just depends when it will take place. Carmichael believes that organization is the key to successfully defeating capitalism. He states that people who claim that people who claim the Blacks have no leaders are stupid; it is a question of organization of the masses, not individual leadership.

Carmichael explained that the purpose of his party is to organize the African people so they can know themselves and fight the enemy successfully. Carmichael added that if you don’t fight your oppressor you make him stronger and yourself weaker. Carmichael urged the individuals in attendance to join his party, The All African People’s Revolutionary Party, to help African people organize through some means. He stated that there is a responsibility to help your people and added that you are against the people if you do not act in some way. Carmichael stated that only one man or woman could not free the people. He explained that one learns by struggling and getting involved. He stated that in order to be free a people must be organized and struggling.

After the lecture by Mr. Carmichael a short question and answer period was conducted. The first person to address Mr. Carmichael was Mr. Abdullah from Martinsville who was opposed to most of his beliefs. The gentleman was finally asked to sit down so others could ask questions.

Question: A lot of Blacks try to live other peoples lives, why do you think this is so?
Carmichael: A lack of organization.
Question: What is the true religion of the Blacks?
Carmichael: The original religion of Africans was a type of ancestor worship. The main concept of this religion was that man is essentially good.
Question: When you say Africans, do you mean a person descended from Africa?
Carmichael: No, you are an African.

After answering a few questions Mr. Carmichael went to Fellowship Hall for an informal discussion.