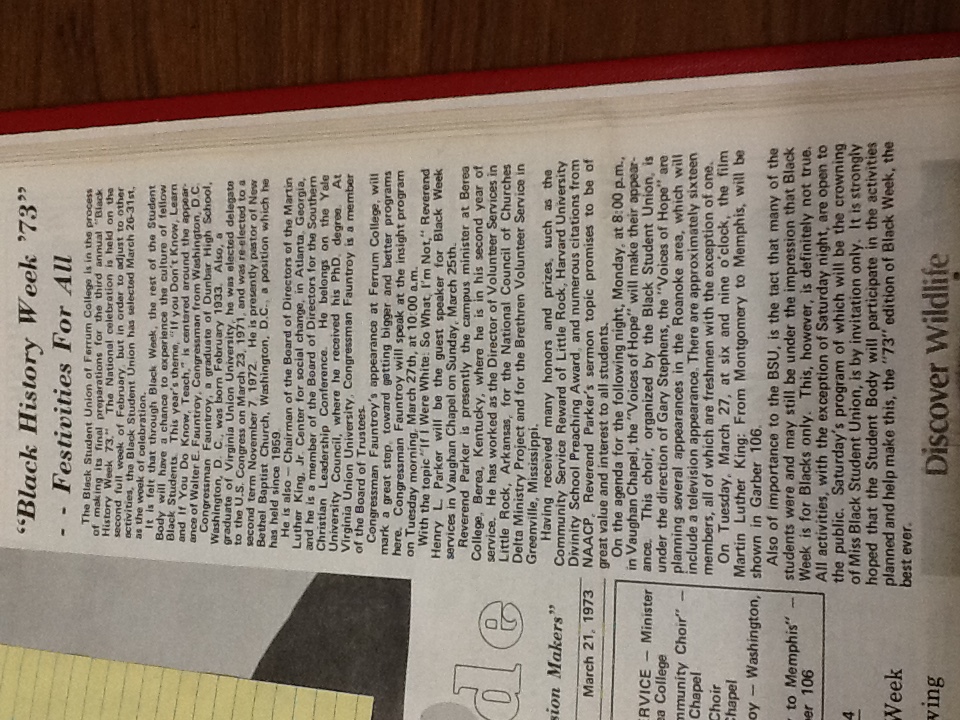 The Black Student Union of Ferrum College is in the process of making its final preparations for the third annual “Black History Week 73.” The National celebration is held on the second full week of February, but in order to adjust to other activities, the Black Student union has selected March 26-31st, as the week of celebration.

It is felt that through Black Week, the rest of the Student Body will have a chance to experience the culture of fellow Black Students. This year’s theme “If you Don’t Know, Learn and If You Do Know, Teach,” is centered around the appearance of Walter E. Fauntroy, Congressman from Washington D.C.

Congressman Fauntroy, a graduate of Dunbar High School, Washington D.C., was born February 1933. Also, a graduate of Virginia Union University, he was elected delegate to the U.S. Congress on March 23, 1971, and was re-elected to a second term November 7, 1972. He is presently pastor of New Bethel Baptist Church, Washington, D.C., a position which he has held since 1959.

With the topic “If I Were White: So What, I’m Not,” Reverend Henry L. Parker is presently the campus minister at Berea College, Berea, Kentucky, where he is in his second year of service. He has worked as the Director of Volunteer Services in Little Rock, Arkansas, for the National Council of Churches Delta Ministry Project and for the Brethren Volunteer Service in Greenville, Mississippi. Having received many honors and prizes, such as the Community Service Reward of Little Rock, Harvard University Divinity School Preaching Award, and numerous citations from NAACP, Reverend Parker’s sermon topic promises to be of great value and interest to all students.

On the agenda for the following night, Monday, at 8:00 p.m., in Vaughn Chapel, the “Voices of Hope” will make their appearance. The choir, organized by the Black Student Union, is under the direction of Gary Stephens, the “Voices of Hope” are planning several appearances in the Roanoke area, which will include a television appearance. There are approximately sixteen members, all of which are freshmen with the exception of one.

On Tuesday, March 27, at six and nine o’clock, the film Martin Luther King: From Montgomery to Memphis, will be shown in Garber 106.

Also of importance to the BSU, is the fact that many of the students were and may still be under the impression that Black Week is for Blacks only. This, however, is definitely not true. All activities, with the exception of Saturday’s program of which will be the crowning of Miss Black Student Union, is by invitation only. It is strongly hoped that the Student Body will participate in the activities planned and help make this, the “73” edition of Black Week, the best ever.