Black Student Union: Equality or Appeasement: We Can’t Have Both (2/1979) 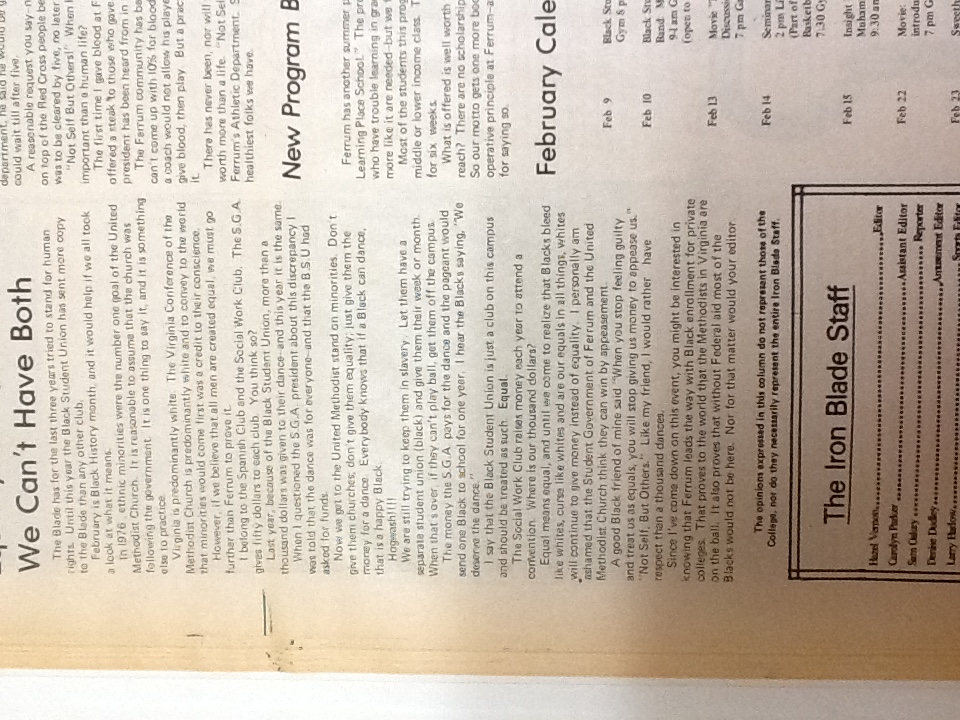 The Blade has for the last three years tried to stand for human rights. Until this year the Black Student Union has sent more copies to the Blade than any other club. February is Black History month, and it would help if we all took a look at what it means. In 1976, ethnic minorities were the number one goal of the United Methodist Church. It is reasonable to assume that the church was following the government. It is one thing to say, and it is something else to practice. Virginia is predominantly white. The Virginia Conference of the Methodist Church is predominantly white and to convey to the world that minorities would come first was a credit to their conscience.

I belong to the Spanish Club and the Social Work Club. The S.G.A. gives fifty dollars to each club. You think so? Last year, because of the Black Student Union, more than a thousand dollars was given to their dance-and this year it is the same. When I questioned the S.G.A. president about this discrepancy I was told that the dance was for everyone-and that the B.S.U had asked for funds. Now we get to the United Methodist stand on minorities. Don’t give them churches; don’t give them equality; just give them the money for a dance. Everybody knows that if a Black can dance, that is a happy Black. Hogwash!!!!

We are still trying to keep them in slavery. Let them have a separate student union (black) and give them their week or month. When that’s over, if they can’t play ball, get them off the campus. The money the S.G.A. pays for the dance and the pageant would send one Black to school for one year. I hear the Blacks saying, “We deserve the dance.” I say that the Black Student Union is just a club on campus and should be treated as such. Equal. The Social Work Club raises money each year to attend a convention. Where is our thousand dollars? Equal means equal, and until we come to realize that Blacks bleed like whites, curse like whites and are equals in all things, whites will continue to give money instead of equality.

I personally am ashamed that the Student Government of Ferrum and the United Methodist Church think they can win by appeasement. A good Black friend of mine said “When you stop feeling guilty and treat others as equals, you will stop giving us money to appease us.” “Not self, But Others.” Like my friend, I would rather have respect than a thousand dances. Since I’ve come down on this event, you might be interested in knowing that Ferrum leads the way with Black enrollment for private colleges. That proves that without Federal aid most of the Blacks would not be here. Nor for that matter would your editor.