Black Student Union: BSU Not Aware Of Our Awareness (3/1979) 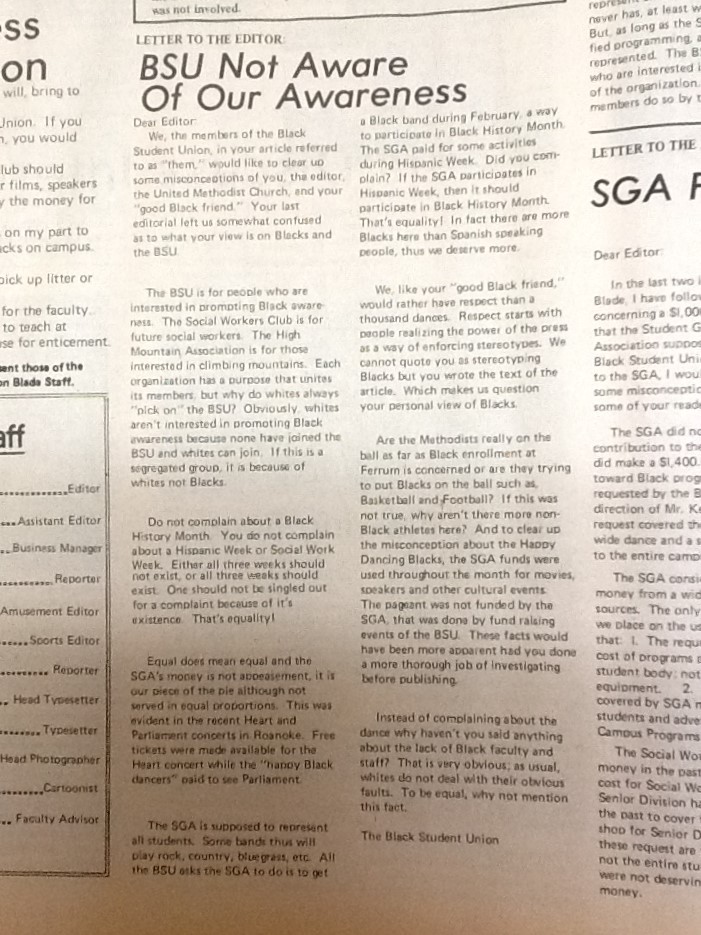 We, the members of the Black Student Union, in your article referred to as “them,” would like to clear up some misconceptions of you, the editor, the United Methodist Church, and your “good Black friend.” Your last editorial left us somewhat confused as to what your view is on Blacks and the BSU. The BSU is for people who are interested in promoting Black awareness. The Social Workers Club is for future social workers. The High Mountain Association is for those interested in climbing mountains. Each its members, but why do whites always “pick on” the BSU?

Obviously, whites aren’t interested in promoting Black awareness because none have joined the BSU and whites can join. If this is a segregation group, it is because of whites not Blacks. Do not complain about a Black History Month. You do not complain about a Hispanic Week or Social Work Week. Either all three weeks should not exist, or all three weeks should exist. One should not be singled out for a complaint because of its existence. That’s equality! Equal does not mean equal and the SGA’s money is not appeasement, it is our piece of the pie although not served in equal proportions.

This was evident in the recent Heart and Parliament concerts in Roanoke. Free tickets were made available for the Heart concert while the “happy Black dancers” paid to see Parliament. The SGA is supposed to represent all students. Some bands thus will play rock, country, bluegrass, etc. All the BSU asks the SGA to do is to get a Black band during February, a way to participate in Black History Month. The SGA paid for some activities during Hispanic Week. Did you complain? If the SGA participates in Hispanic Week, then it should participate in Black History Month. That’s equality!

In fact there are more Blacks here than Spanish speaking people, thus we deserve more. We, like your “good Black friend,” would rather have respect than a thousand dances. Respect starts with people realizing the power of the press as a way of enforcing stereotypes. We cannot quote you as stereotyping Blacks but you wrote the text of the article.

Which makes us question your personal view of Blacks. Are the Methodist really on the ball as far as Black enrollment at Ferrum is concerned or are they trying to put Blacks on the ball such as, Basketball and Football? If this was not true, why aren’t there more non Black athletes here? And to clear up the misconception about the Happy Dancing Blacks, the SGA funds were used throughout the month for movies, speakers and other cultural events.

The pageant was not funded by the SGA, that was done by fundraising events of the BSU. These facts would have been more apparent had you done a more thorough job of investigating before publishing. Instead of complaining about the dance, why haven’t you said anything about the lack of Black faculty and staff? That is very obvious; as usual, whites do not deal with their obvious faults. To be equal, why not mention this fact.