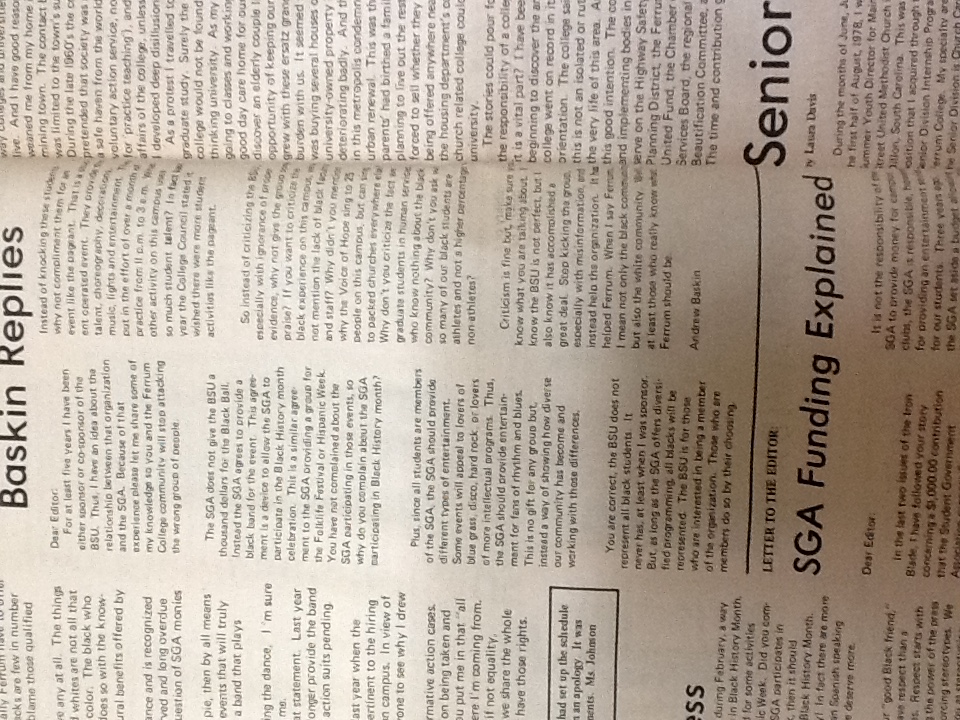 For at least five years I have been either sponsor or co-sponsor of the BSU. Thus, I have an idea about the relationship between that organization and the SGA. Because of that experience please let me share some of my knowledge so you and the Ferrum College community will stop attacking the wrong group of people.

The SGA does not give the BSU a thousand dollars for the Black Ball. Instead the SGA agrees to provide a black band for the event. This agreement is a device to allow the SGA to participate in the Black History month celebration. This is a similar agreement to the SGA providing a group for the Folklife Festival or Hispanic Week. You have not complained about the SGA participating in those events, so why do you complain about the SGA participating in Black History month?

Plus, since all students are members of the SGA, the SGA should provide different types of entertainment. Some events will appeal to lovers of blue grass, disco, hard rock, or lovers of more intellectual programs. Thus, the SGA should provide entertainment for fans of rhythm and blues. This is no gift for any group, but instead a way of showing how diverse our community has become and working with those differences.

You are correct, the BSU does not represent all black students. It never has, at least when I was sponsor. But, as long as the SGA offers diversified programming, all blacks will be represented. The BSU is for those who are interested in being a member of the organization. Those who are members do so by their choosing. Instead of knocking these students why not compliment them for an event like the pageant. That is a student operated event. They provide the talent, choreography, decorations, music, lights and entertainment. They put in the effort of over a month of practice from 11 p.m. to 3 a.m. What other activity on this campus uses so much student talent? In fact that year the College Council stated it wished there were more student activities like the pageant.

So instead of criticizing the BSU, especially with ignorance of proper evidence, why not give the group some praise? If you want to criticize the black experience on this campus, why not mention the lack of black faculty and staff? Why didn’t you mention why the Voices of Hope sing to 25people on this campus, but can sing to packed churches everywhere else? Why don’t you criticize the fact we graduate students in human services, who know nothing about the black community? Why don’t you ask why so many of our black students are athletes and not a higher percentage of non-athletes?

Criticism is fine but, make sure you know what you are talking about. I know the BSU is not perfect, but I also know it has accomplished a great deal. Stop kicking the group, especially with misinformation, and instead help the organization. It has helped Ferrum. When I say Ferrum, I mean not only the black community. Well, at least those who really know what Ferrum should be.