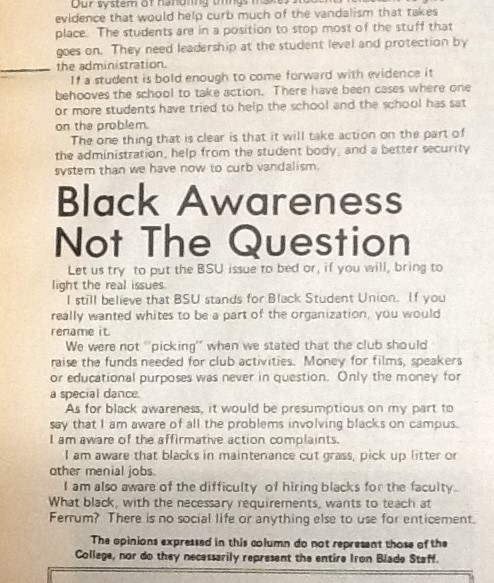 Let us try to put the BSU issue to bed or, if you will, bring to light the real issues. I still believe that BSU stands for Black Student Union. If you really wanted whites to be a part of the organization, you would rename it. We were not “picking” when we stated that the club should raise the funds needed for club activities. Money for films, speakers or educational purposes was never in question. Only the money for a special dance. As for black awareness, it would be presumptuous on my part to say that I am aware of all the problems involving blacks on campus. I am aware of the affirmative action complaints. I am aware that blacks in maintenance cut grass, pick up litter or other menial jobs. I am also aware of the difficulty of hiring blacks for the faculty. What black, with the necessary requirements, wants to teach at Ferrum? There is no social life or anything else to use for enticement. This is a beautiful place to bring up children if they are white. But what does Franklin County and especially Ferrum have to offer the black child? Yes, we are aware that blacks are few in number here on this campus, but at least we don’t blame those qualified blacks for saying no. What we don’t understand is why we have any at all. The things that make this campus attractive to married whites are not all that enticing to married blacks or singles of any color. The black who chooses Ferrum as a place of employment does so with the knowledge that he or she is cut off from the cultural benefits offered by other schools in better localities. Black History Month is a national observance and is recognized in every state in the union. It is a well-deserved and long overdue observance. It has nothing to do with the question of SGA monies for the BSU dance. As to that money being your piece of the pie, then by all means eat your piece. But eat it with speakers and events that will truly make all aware of Black History. Money for a band that plays modern music is not yet history. Whatever reason the SGA had for sponsoring the dance, I’m sure it pleased those concerned. It did not please me. I said it was appeasement and I stick to that statement. Last year when it was avowed that the SGA would no longer provide the band for the BSU dance, there were no affirmative action suits pending. There were this year. We may be ill informed, but I was present last year when the statement was made and I have information pertinent to the hiring practices of Ferrum from a prominent black on campus. In view of the issues at the time it should be easy for anyone to see why I drew the conclusion I did about appeasement. I have not received one letter about the affirmative action cases. I have tried to get statements to verify the action being taken and cannot get a printable statement. So before you put me in that “all whites” category, it might help to find out where I’m coming from. I believe in equality for every human being-if not equality, at least the same rights to equality. As long as we share the whole pie and not the slices, I’m not sure we will ever have those rights.