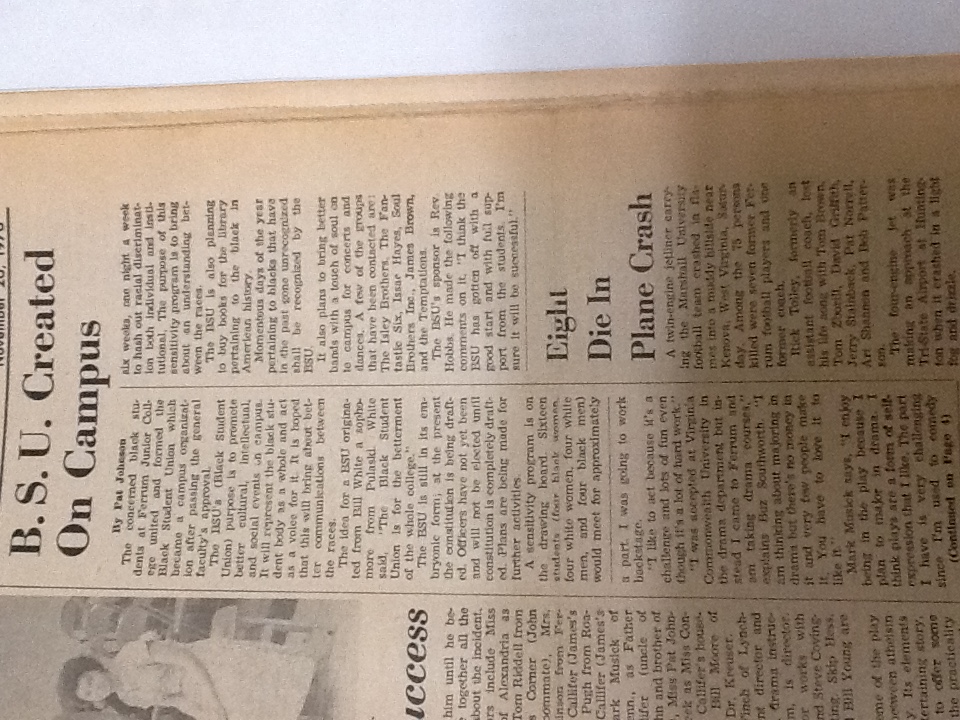 The concerned black students at Ferrum Junior College united and formed the Black Student Union which became a campus organization after passing the general faculty’s approval. The BSU’s (Black Student Union) purpose is to promote better cultural, intellectual, and social events on campus. It will represent the black student body as a whole and act as a voice for it. It is hoped that this will bring about better communications between the races. The idea for a BSU originated from Bill White a sophomore from Pulaski. White said “The Black Student Union is for the betterment of the whole college.”

The BSU is still in its embryonic form; at the present the constitution is being drafted. Officers have not yet been and will not be elected until constitution is completely drafted. Plans are being made for further activities. A sensitivity program is on the drawing board. Sixteen students (four black women, four white women, four white men, and four black men) would approximately six weeks, one night a week to hash out racial discrimination both individual and institutional. The purpose of this sensitivity program is to bring about an understanding between the races.

The BSU is also planning to buy books for the library pertaining to the black in American history. Momentous days of the year pertaining to blacks that have in the past gone unrecognized shall be recognized by the BSU. It also plans to bring better bands with a touch of soul on campus for concerts and dances. A few of the groups that have been contacted are: The Isley Brothers, The Fantastic Six, Issac Hayes, Soul Brothers Inc., James Brown, and the Temptations. The BSU’s sponsor is Rev. Hobbs. He made the following comments on it. “I think the BSU has gotten off with a good start and with full support from the students. I’m sure it will be successful.