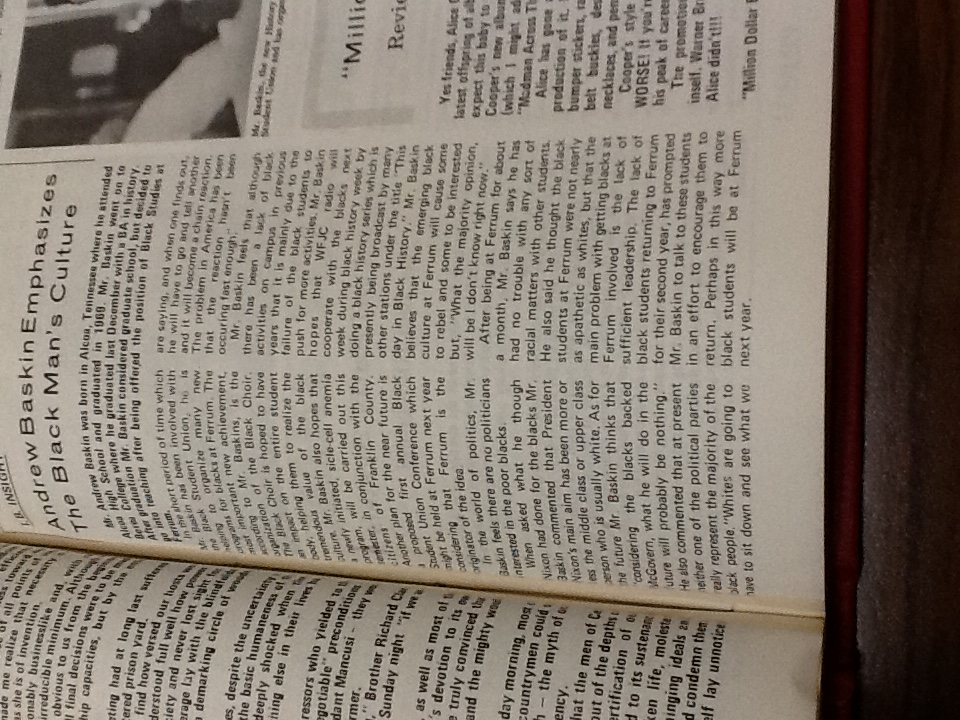 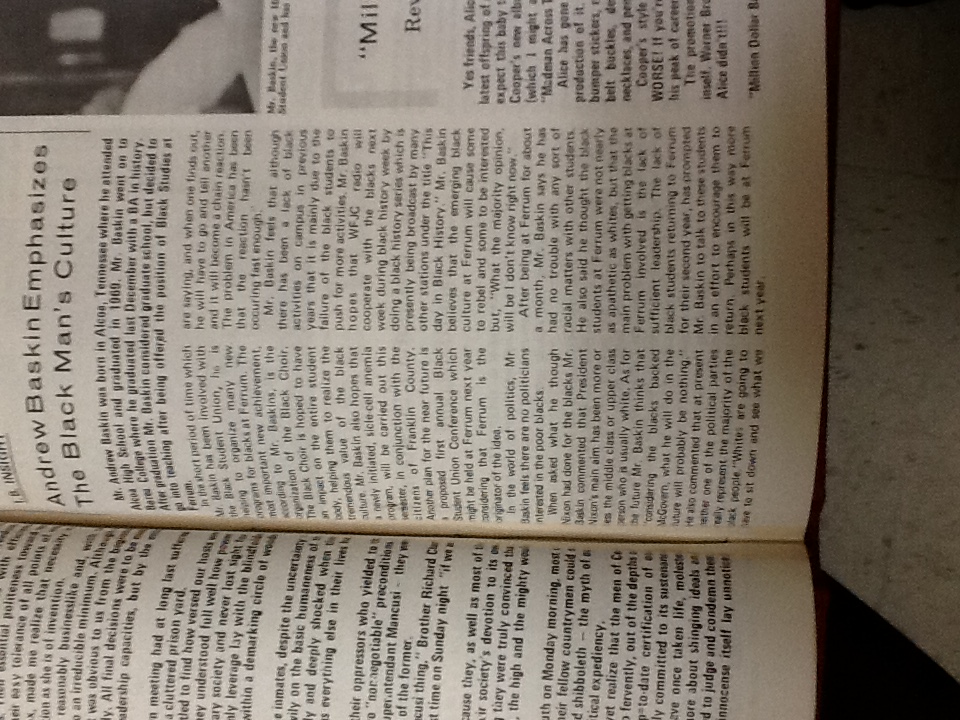 Mr. Andrew Baskin was born in Alcoa, Tennessee where he attended Alcoa High School and graduated in 1969. Mr. Baskin went on to Berea College where he graduated last December with a BA in history. After graduation Mr. Baskin considered graduate school, but decided to go into teaching after being offered the position of Black Studies at Ferrum.

In the short period of time which Mr. Baskin has been involved with the Black Student Union, he is helping to organize many new programs for blacks at Ferrum. The most important new achievement, according to Mr. Baskins, is the organization of the Black Choir. The Black Choir is hoped to have an impact on the entire student body, helping them to realize the tremendous value of the black culture. Mr. Baskin also hopes that a newly initiated, sickle-cell anemia program, will be carried out this semester, in conjunction with the citizens of Franklin County. Another plan for the near future is the originator of the idea. In the world of politics, Mr. Baskin feels there are no politicians interested in the poor blacks. When asked what he thought Nixon had done for the blacks Mr. Baskin commented that President Nixon’s main aim has been more or less the middle class or upper class person who is usually white. As for the future Mr. Baskin thinks that “considering the blacks backed McGovern , what he will do in the future will probably be nothing.”

He also commented that at present neither one of the political parties represent the majority of the black people. “Whites are going to have to sit down and see what we are saying, and when one finds out, he will have to go and tell another and it will become a chain reaction. The problem in America has been that the reaction hasn’t been occurring fast enough.” Mr. Baskin feels that although there has been a lack of black activities on campus in previous years that it is mainly due to the failure of the black students to push for more activities. Mr. Baskin hopes that WFJC radio will cooperate with the blacks next week during black history week by doing a black history series which is presently being broadcast by many other stations under the title “This day in Black History.”

Mr. Baskin believes that the emerging black culture at ferrum will cause some to rebel and some to be interested but, “What the majority opinion, will be I don’t know right now.” After being at Ferrum for about a month, Mr. Baskin says he has had no trouble with any sort of racial matters with other students. He also said he thought the black students at Ferrum were not nearly as apathetic as whites, but that the main problem with getting blacks at Ferrum involved is the lack of sufficient leadership. The lack of black students returning to Ferrum for their second year, has prompted Mr. Baskin to talk to these students in an effort to encourage them to return. Perhaps in this way more black students will be at Ferrum next year.