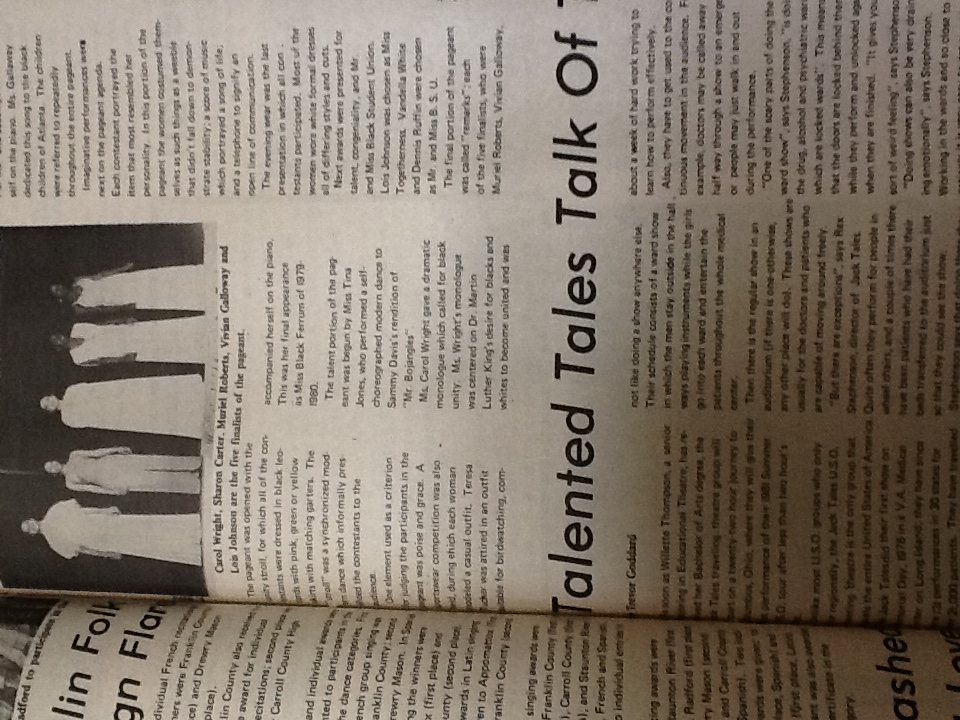 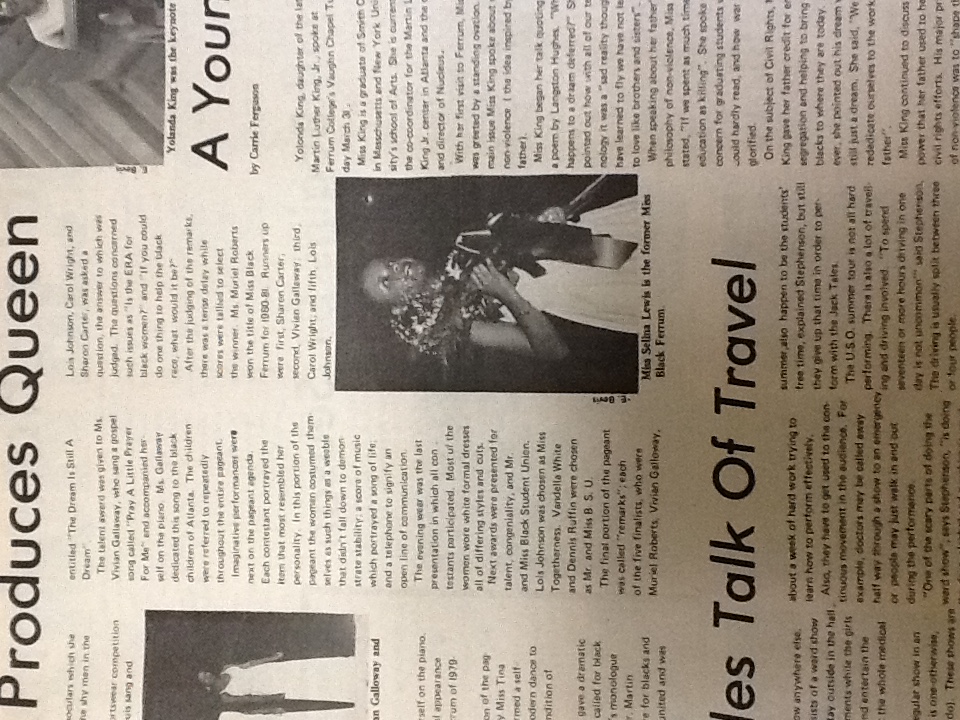 All American Girls was the theme of the 9th annual Miss Black Ferrum Pageant, which was held in Schwartz Gym on March 27, 1981 at 8:00 p.m. The pageant was opened with the unity stroll, for which all of the contestants were dressed in black leotards with pink, green or yellow skirts with matching garters. The “stroll” was a synchronized modern dance which informally presented the contestants to the audience. One element used as a criterion for judging the participants in the pageant was poise and grace. A sportswear competition was also held, during which each woman modeled a casual outfit. Teresa Tucker was attired in an outfit suitable for birdwatching, complete with binoculars which she used to find the shy men in the audience.

After the sportswear competition Miss Selina Louis sang and accompanied herself on the piano. This was her final appearance as Miss Black Ferrum of 1979-1980. The talent portion of the pageant was begun by Miss Tina Jones, who performed a self-choreographed modern dance to Sammy Davis’ rendition of “Mr. Bojangles.” Ms. Carol Wright gave a dramatic monologue which called for black unity. Ms. Wright’s monologue was centered on Dr. Martin Luther King’s desire for blacks and whites to become united and was entitled “The Dream Is Still A Dream.” The talent award was given to Ms. Vivian Gallaway, who sang a gospel song called “Pray A Little Prayer For Me” and accompanied herself on the piano. Ms. Gallaway dedicated this song to the black children of Atlanta. The children were referred to repeatedly throughout the entire pageant.

Imaginative performances were next on the pageant agenda. Each contestant portrayed the item that most resembled her personality. In this portion of the pageant the women costumed themselves as such things as a weeble that didn’t fall down to demonstrate stability; a score of music which portrayed a song of life; and a telephone to signify an open line of communication. The evening wear was the last presentation in which all contestants participated. Most of the women wore white formal dresses of all differing styles and cuts.

Next awards were presented for talent, congeniality, and Mr. and Miss Black Student Union. Lois Johnson was chosen as Miss Togetherness. Vandella White and Dennis Ruffin were chosen and Mr. and Miss BSU. The final portion of the pageant was called “remarks”; each of the five finalists, who were Muriel Roberts, Vivian Gallaway, Lois Johnson, Carol Wright, and Sharon Carter, was asked a question, the answer to which was judged. The questions concerned such issues as “Is the ERA for black women?” and “If you could do one thing to help the black race, what would it be?” After the judging of the remarks, there was a tense delay while scores were tallied to select the winner. Ms. Muriel Roberts won the title of Miss Black Ferrum for 1980-81. Runners up were first, Sharon Carter; second, Vivian Gallaway; third, Carol Wright; and fifth, Lois Johnson.