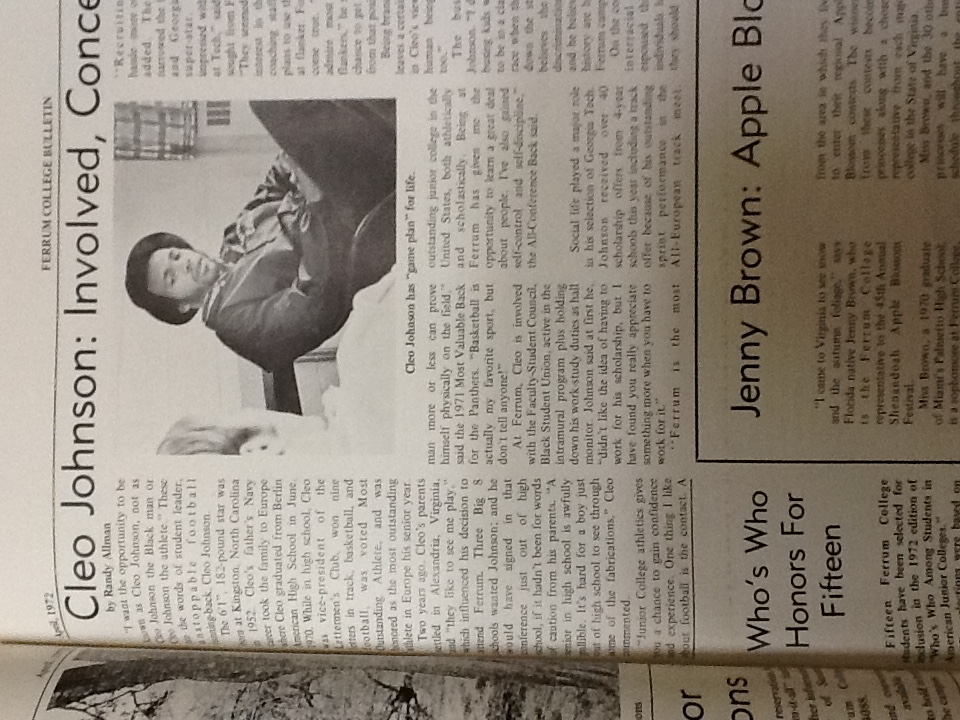 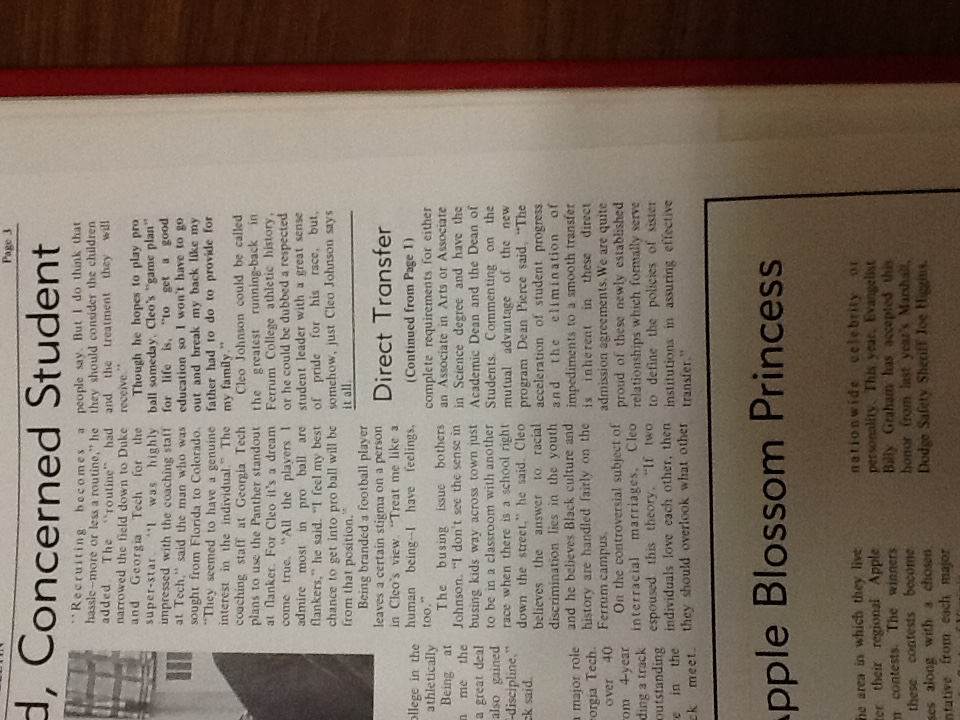 The 6’1”, 182-pound star was born in Kingston, North Carolina in 1952. Cleo’s father’s Navy career took the family to Europe where Cleo graduated from Berlin American High School in June, 1970. While in high school, Cleo was vice-president of the Letterman's Club, won nine letters in track, basketball, and football, was voted Most Outstanding Athlete, and was honored as the most outstanding athlete in Europe his senior year.

Two years ago, Cleo’s parents settled in Alexandria, Virginia, and “they like to see me play,” which influenced his decision to attend Ferrum. Three Big 8 schools wanted Johnson; and he would have signed in that conference just out of high school, if it hadn’t been for words of caution from his parents. “A senior in high school is awfully gullible. It’s hard for a boy just out of high school to see through some of the fabrications,” Cleo commented.

“Junior College athletics gives you a chance to gain confidence and experience. One thing I like about football is the contact. A man more or less can prove himself physically on the field,” said the 1971 Most Valuable Back for the Panthers. “Basketball is actually my favorite sport, but don’t tell anyone!”

At Ferrum Cleo is involved with the Faculty-Student Council, Black Student Union, active in the instrumental program plus holding down his work study duties as hall monitor. Johnson said at first he, “didn’t like the idea of having  to work for his scholarship, but I have found you really appreciate something more when you have to work for it.”

“Ferrum is the most outstanding junior college in the United States, both athletically and scholastically. Being at Ferrum has given me the opportunity to learn a great deal about people. I’ve also gained self-control and self-discipline,” the All-Conference Back said.

Social life played a major role in his selection of Georgia Tech. Johnson received over 40 scholarship offers from 4-year schools this year including a track offer because of his outstanding sprint performance in the All-European track meet. “Recruiting becomes a hassle-more or less a routine,” he added. The “routine” had narrowed the field down to Duke and Georgia Tech for the super-star. “I was highly impressed with the man who was sought from Florida to Colorado. “They seemed to have a genuine interest in the individual.” The coaching staff at Georgia Tech plans to use the Panther standout at flanker. For Cleo it’s a dream come true. “All the players I admire most in pro ball will be from that position.”

Being branded a football player leaves a certain stigma on a person in Cleo’s view. “Treat me like a human being-I have feelings, too.”

The busing issue bothers Johnson. “I don’t see the sense in busing kids way across town just to be in a classroom with another race when there is a school right down the street,” he said. Cleo believes the answer to racial discrimination lies in the youth and he believes Black culture and history are handled fairly on the Ferrum campus.

On the controversial subject of interracial marriages, Cleo espoused this theory, “If two individuals love each other, then they should overlook what other people say. But I do think that they should consider the children and the treatment they will receive.”

Though he hopes to play pro ball someday, Cleo’s “game plan” for life is, “to get a good education so I won’t have to go out and break my back like my father had to do to provide for my family.”

Cleo Johnson could be called the greatest running-back in Ferrum College athletic history, or he could be dubbed a respected student leader with a great sense of pride for his race, but, somehow, just Cleo Johnson says it all.