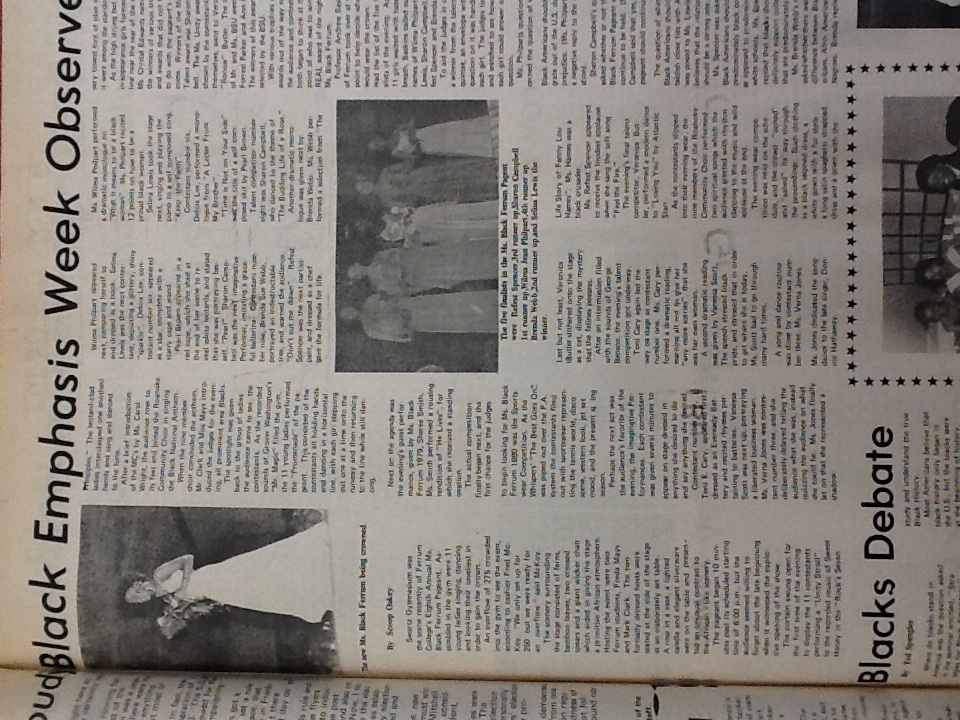 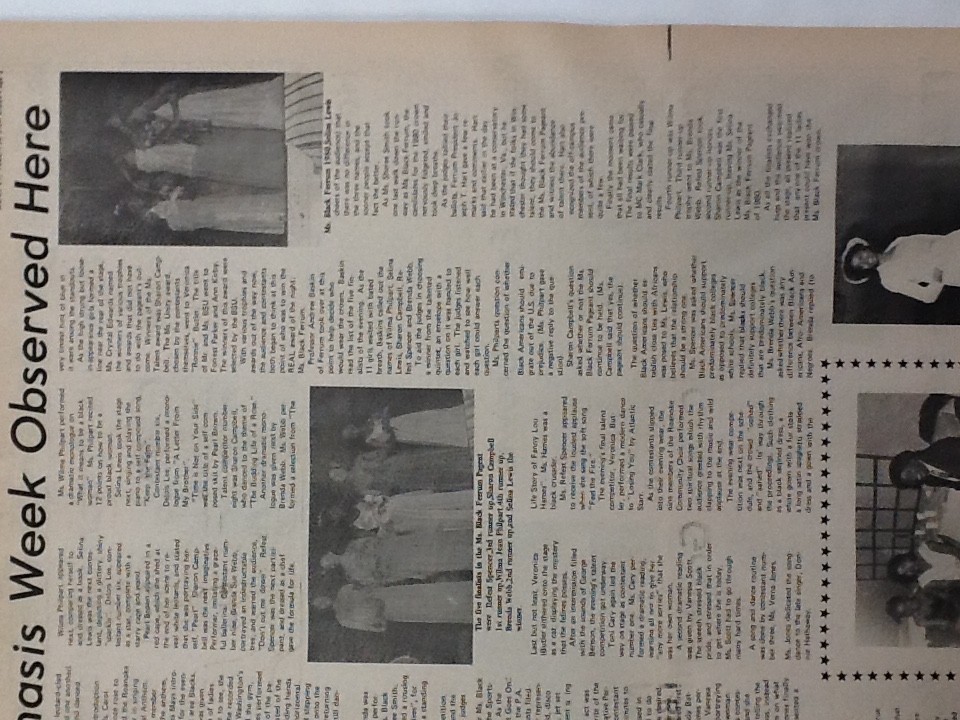 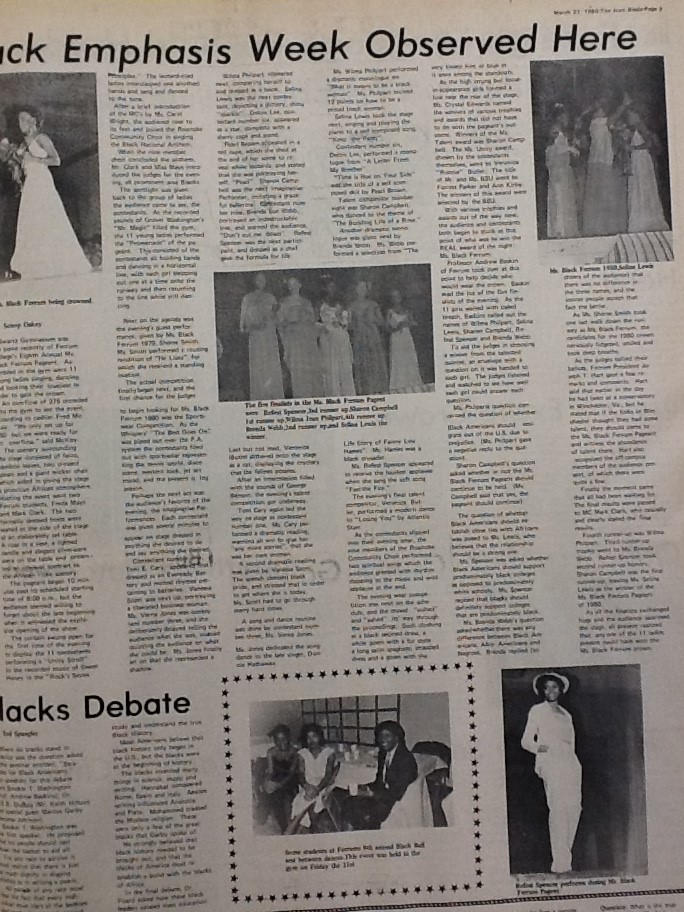 Swartz Gymnasium was the scene recently of Ferrum College’s Eighth Annual Ms. Black Ferrum Pageant. Assembled in the gym were 11 young ladies singing, dancing and looking their loveliest in order to gain the crown. An overflow of 275 crowded into the gym to see the event, according to cashier Fred McKoy. “We only set up for 250 but we were ready for an overflow.” said McKoy. The scenery surrounding the stage consisted of ferns, bamboo leaves, two crossed spears and a giant wicker chair which aided in giving the stage a primitive African atmosphere. Hosting the event were two Ferrum students, Freda Mays and Mark Clark. The two formally dressed hosts were seated at the side of the stage at an elaborate set table. A rose in a vase, a lighted candle and elegant silverware were on the table and presented an unusual contrast to the African like scenery.

The pageant began 10 minutes past its scheduled starting time of 8:00 p.m., but the audience seemed willing to forget about the late beginning when it witnessed the explosive opening of the show. The curtain swung open for the first time of the evening to display the 11 contestants performing a “Unity Stroll” to the recorded music of Sweet Honey in the “Rock’s Seven Principles.” The leotard-clad ladies interclapsed one another’s hands and sang and danced to the tune. After a brief introduction of the MC’s by Ms. Carol Wright, the audience to its feet and joined the Roanoke Community Choir in singing the Black National Anthem. When the nine member choir concluded the anthem, Mr. Clark and Miss Mays introduced the judges for the evening, all prominent area Blacks. The spotlight was given back to the group of ladies the audience came to see, the contestants.

As the recorded sounds of Grover Washington’s “Mr. Magic” filled the gym, the 11 young ladies performed the “Promenade” of the pageant. This consisted of the contestants all holding hands and dancing in a horizontal line, with each girl stepping out one at a time onto the runaway and then returning to the line while still dancing. Next on the agenda was the evening’s guest performance, given by Ms. Black Ferrum 1979, Sheree Smith. Ms. Smith performed a rousing rendition of “He Lives”, for which she received a standing ovation. The actual competition finally began next, and the first chance for the judges to begin looking for Ms. Black Ferrum 1980 was the Sportswear Competition. As the Whispers’ “The Beat Goes On” was piped out over the P.A. system the contestants filed out with sportswear representing the tennis world, disco scene, western look, jet set mood, and the present spring season. Perhaps the next act was the audience’s favorite of the evening, the imaginative Performances.

Each contestant was given several minutes to appear on stage dressed in anything she desired to do and say anything she desired. Contestant number one, Toni E. Cary, appeared first dressed as an Eveready Battery and recited rhymes pertaining to batteries. Vanessa Scott was next up, portraying a liberated business woman. Ms. Verna Jones was contestant number three, and she deliberately delayed telling the audience what she was, instead quizzing the audience on what she could be. Ms. Jones finally let on that she represented a shadow. Wilma Philpart appeared next, comparing herself to and dressed as a book. Selina Lewis was the next contestant, depicting a glittery, shiny “sparkle”.

Delois Lee, contestant number six, appeared as a star, complete with a starry cape and wand. Pearl Brown appeared in a red cape, which she shed at the end of her scene to reveal white leotards, and stated that she was portraying herself, “Pearl.” Sharon Campbell was the next imaginative performer, imitating a graceful ballerina. Contestant number nine, Brenda Sue Webb, portrayed an indestructible tree, and warned the audience, “Don’t cut me down.” Refest Spencer was the next participant, and dressed as a chef gave the formula for life. Last but not least, Veronica Butler slithered onto the stage as a cat, displaying the mystery that the felines possess.

After an intermission filled with the sounds of George Benson, the evening’s talent competition got underway. Toni Cary again led the way on stage as contestant number one. Ms. Carey performed a dramatic reading was given by Vanessa Scott. The speech stressed black pride, and stressed that in order to get where she is today, Ms. Scott had to go through many hard times. A song and dance routine was done by contestant number three, Ms. Verna Jones. Ms. Jones dedicated the song-dance to the late singer, Donnie Hathaway. Ms. Wilma Philpart performed a dramatic monologue on “What it means to be a black woman.” Ms. Philpart recited 12 points on how to be a proud black woman.

Selina Lewis took the stage next, singing and playing the piano to a self composed song, “Keep the Faith.” Contestant number six, Delois Lee, performed a monologue from “A Letter From My Brother.” “Time is Not on Your Side” was the title of a self composed skit by Pearl Brown. Talent competitor number eight was Sharon Campbell, who danced to the theme of “The Budding Life of a Rose.” Another dramatic monologue was given next by Brenda Webb. Ms. Webb performed a selection from “The Life Story of Fanny Lou Hames.” Ms. Hames was a black crusader.

Ms. Refest Spencer appeared to receive the loudest applause when she sang the soft song “Feel the Fire.” The evening’s final talent competitor, Veronica Butler, performed a modern dance to “Losing You” by Atlantic Starr. As the contestants slipped into their evening wear, the nine members of the Roanoke Community Choir performed two spiritual songs which the audience greeted with rhythm clapping to the music and wild applause at the end. The evening wear competition was next on the schedule, and the crowd “oohed” and “ahhed” its way through the proceedings.

Such clothing as a black sequined dress, a white gown with a fur stole, a long satin spaghetti strapped dress and a gown with the very tiniest hint of blue in it were among the standouts. As the high strung but loose-in-appearance girls formed a line near the rear of the stage, Ms. Crystal Edwards named the winners of various trophies and awards that did not have to do with the pageant’s outcome. Winners of the Ms. Talent award was Sharon Campbell. The Ms. Unity award, chosen by the contestants themselves, went to Veronica “Ronnie” Butler. The title of Mr. and Ms. BSU went to Forrest Parker and Ann Kirby. The winners of this award were selected by the BSU.

With various trophies and awards out of the way now, the audience and contestants both began to think at this point of who was to win the REAL award of the night: Ms. Black Ferrum. Professor Andrew Baskin of Ferrum took over at this point to help decide who would wear the crown. Baskin read the list of the five finalists of the evening. As the 11 girls waited with bated breath, Baskins called out the names of Wilma Philpart, Selina Lewis, Sharon Campbell, Refest Spencer and Brenda Webb.

To aid the judges in choosing a winner from the talented quintet, an envelope with a question on it was handed to each girl. The judges listened and watched to see how well each girl could answer each question. Ms. Philpart’s question concerned whether Black Americans should emigrate out of the U.S. due to prejudice. (Ms. Philpart gave a negative reply to the question). Sharon Campbell’s question asked whether or not the Ms. Black Ferrum Pageant should continue to be held. (Ms. Campbell said that yes, the pageant should continue). The question of whether Black Americans should establish close ties with Africans was posed to Ms. Lewis, who believes that the relationship should be a strong one. Ms. Spencer was asked whether Black Americans should support predominantly black colleges as opposed to predominantly white schools. Ms. Spencer replied that blacks should definitely support colleges that are predominantly black. Ms. Brenda Webb’s question asked whether there was any difference between Black Americans, Afro-Americans and Negroes.

Brenda replied (to cheers of the audience) that there was no difference in the three names, and the sooner people accept that fact the better. As Ms. Sheree Smith took one last walk down the runway as Ms. Black Ferrum, the candidates for the 1980 crown nervously fidgeted, smiled and took deep breaths. As the judges tallied their final ballots, Ferrum President Joseph T. Hart gave a few remarks and comments. Hart said that earlier in the day he had been at a conservatory in Winchester, Va., but he stated that if the folks in Winchester thought they had some talent, they should come to the Ms. Black Ferrum Pageant and witness the abundance of talent there. Hart also recognized the off-campus members of the audience present, of which there were quite a few.

Finally the moment came that all had been waiting for. The final results were passed to MC Mark Clark, who casually and clearly stated the final results. Fourth runner-up was Wilma Philpart. Third runner-up trophy went to Ms. Brenda Webb. Refest Spencer took second runner-up honors. Sharon Campbell was the first runner-up, leaving Ms. Selina Lewis as the winner of the Ms. Black Ferrum Pageant of 1980. As all the finalists exchanged hugs and the audience swarmed the stage, all present realized that anyone of the 11 ladies present could have won the Ms. Black Ferrum crown.