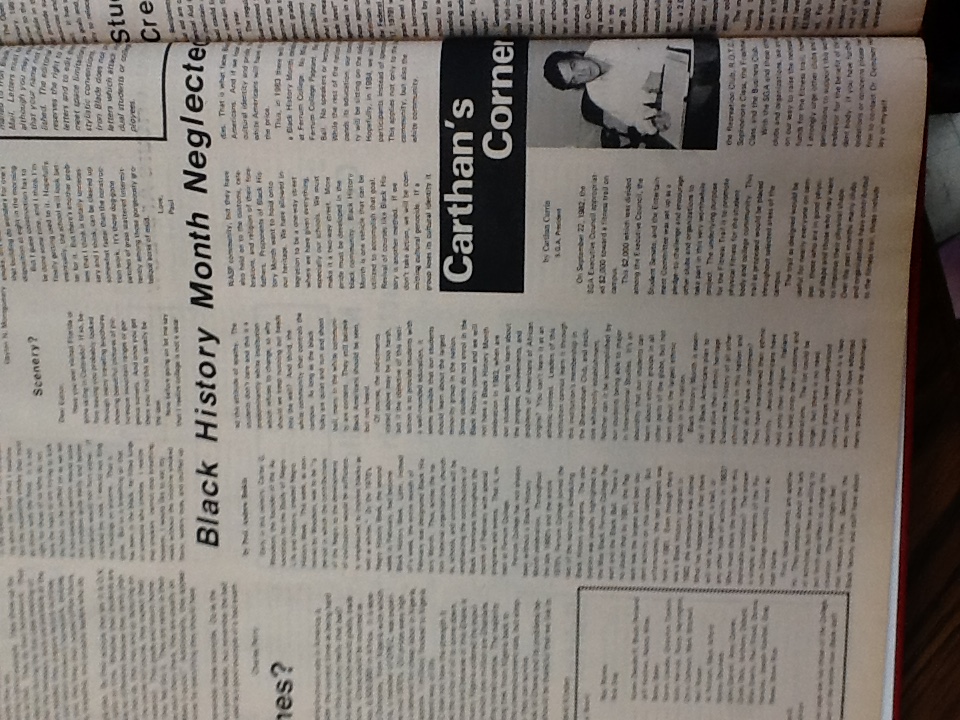 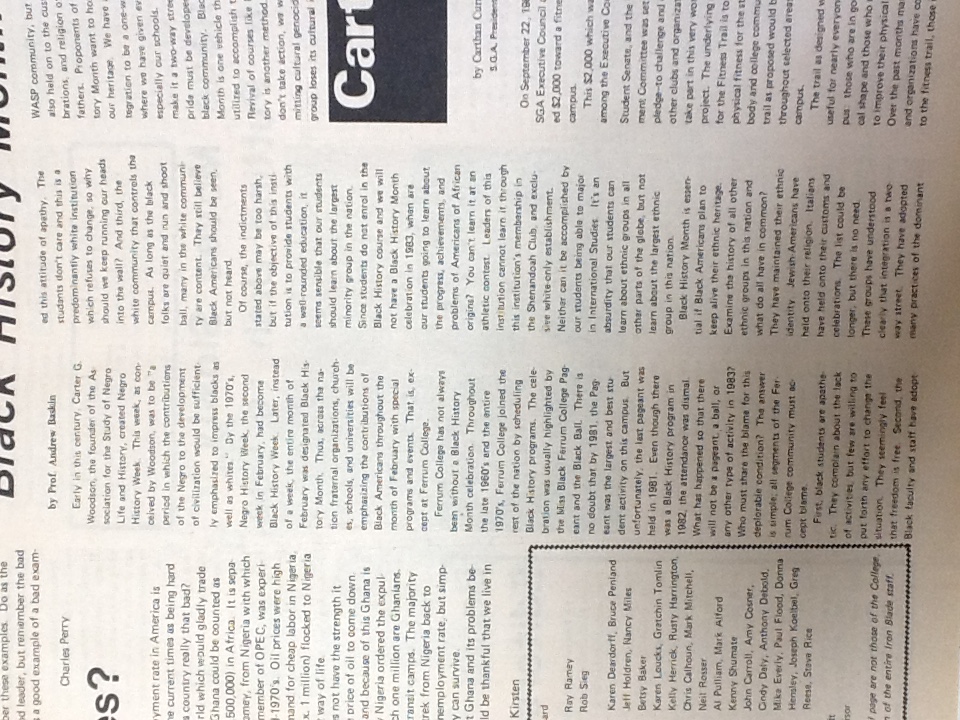 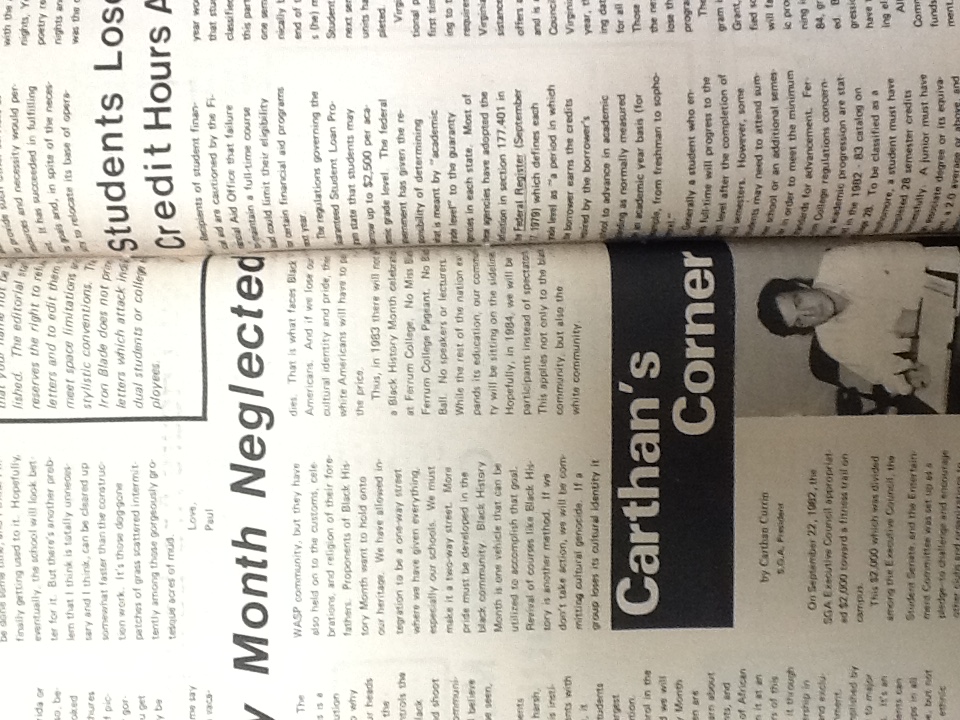 Early in this century, Carter G. Woodson, the founder of the Association for the Study of Negro Life and History, created Negro History Week. This week, as conceived by Woodson, was to be “a period in which the contributions of the Negro to the development of civilization would be sufficiently emphasized to impress blacks as well as whites.” By the 1970’s, Negro History Week, the second week in February, had become Black History Week. Later, instead of a week, the entire month of February was designated Black History Month. Thus, across the nation fraternal organizations, churches, schools, and universities will be emphasizing the contributions of Black Americans throughout the month of February with special programs and events. That is, except at Ferrum College.

Ferrum College has not always been without a Black History Month celebration. Throughout the late 1960’s and the entire 1970’s, Ferrum College joined the rest of the nation by scheduling Black History programs. The celebration was usually highlighted by the Miss Black Ferrum College Pageant and the Black Ball. There is no doubt that by 1981, the pageant was the largest and best student activity on this campus. But unfortunately, the last pageant was held in 1981. Even though there was a Black History program in 1982, the attendance was dismal. What has happened so that there will not be a pageant, a ball, or any other type of activity in 1983? Who must share the blame for this deplorable condition? The answer is simple; all segments of the Ferrum College community must accept blame.

First, black students are apathetic. They complain about the lack of activities, but few are willing to put forth any effort to change the situation. They seemingly feel that freedom is free. Second, the black faculty and staff have adopted this attitude of apathy. The students don’t care and this is a predominantly white institution which refuses to change, so why should we keep running our heads into the wall? And third, the white community that controls the campus. As long as the black folks are quiet and run and shoot ball, many in the white community are content. They still believe Black Americans should be seen, but not heard.

Of course, the indictments stated above may be too harsh, but if the objective of this institution is to provide students with a well-rounded education, it seems sensible that our students should learn about the largest minority group in the nation. Since students do not enroll in the Black History course and we will not have a Black History Month celebration in 1983, when are our students going to learn about the progress, achievements, and problems of Americans of African origins? You can’t learn it at an athletic contest. Leaders of this institution’s membership in the Shenandoah Club, and exclusive white-only establishment. Neither can it be accomplished by our students being able to major in International Studies. It’s an absurdity that our students can learn about ethnic groups in all other parts of the globe, but not learn about the largest ethnic group in this nation.

Black History Month is essential if Black Americans plan to keep alive their ethnic heritage. Examine the history of all other ethnic groups in this nation and what do all have in common? They have maintained their ethnic identity. Jewish-Americans have held onto their religion. Italians have held onto their customs and celebrations. The list could be longer, but there is no need. These groups have understood clearly that integration is a two-way street. They have adopted many practices of the dominant WASP community, but they have also held on to the customs, celebrations, and religion of their forefathers. Proponents of Black History Month want to hold onto our heritage. We have allowed integration to be a one-way street where we have given everything, especially our schools. We must make it a two-way street. More pride must be developed in the black community. Black History Month is one vehicle that can be utilized to accomplish that goal. Revival of courses like Black History is another method. If we don’t take action, we will be committing cultural genocide. If a group loses its cultural identity it dies. That is what faces Black Americans. And if we lose our cultural identity and pride, then white Americans will have to pay the price.

Thus, in 1983 there will not be a Black History Month celebration at Ferrum College. No Miss Black Ferrum College Pageant. No Black Ball. No speakers or lecturers. While the rest of the nation expands its education, our community will be sitting on the sidelines. Hopefully, in 1984, we will be participants instead of spectators. This applies not only to the black community, but also the white community.