Dayworld: A Hole in Wednesday 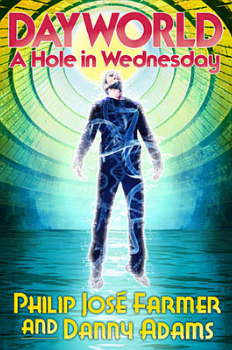 Philip José Farmer’s Dayworld trilogy, as well as his short story “The Sliced-Crosswise Only-On-Tuesday World,” imagines a severely overcrowded future that cures the overpopulation problem by “stoning” six-sevenths of the population each day.

Farmer began a prequel Dayworld novel, A Hole in Wednesday, but did not complete it, and Meteor House is pleased that Danny Adams has picked up the mantle. Set some time before the events in the original trilogy, the novel nonetheless has direct links to the acclaimed series, exploring the developing world and antecedent characters who vigorously challenge the life in which they find themselves trapped.

The Dayworld was born from the overpopulation and chaos of the late 21st century: live just one day out of seven, spend the rest in a suspended animation called stoning, and humanity will only need one-seventh of the resources it was consuming on its dying planet. Now, three-and-a-half centuries into this New Era—or two “subjective generations” later—everyone seems blessed with peace and abundance. But one man is about to discover that the seeds of the world’s destruction were deeply planted by the time the Dayworld began.

Interviews with the Author...