New Book Blurbs and Reviews: You'll See This Message When It's Too Late 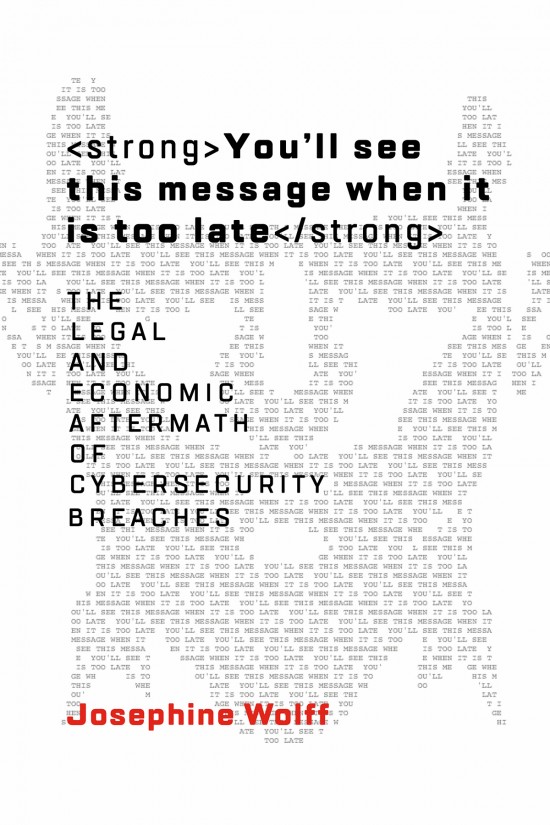 If you're afraid of computer hacking, cyberattacks, or cyberwarfare, this book is likely not at the top of your to-read list. You should read it anyway. Maybe not at night before going to bed - but perhaps, for instance, if you're thinking about using some unsecured public wireless network to check your bank account or place online orders.

Wolff’s detailed chronicle about “the legal and economic aftermath of cybersecurity breaches”, as the subtitle goes, published by MIT, is both unsettling and strangely comforting. Unsettling in that it is one of the most accessible recent records of just how many and how powerful the cybercriminals are, including national governments like China and North Korea. There are a lot of familiar names of victims in this book: Sony and Playstation, Paypal, not to mention the U.S. and state governments. But there’s also comfort in a back-handed way that the big criminals typically have big targets—or if not, like China, their aim isn’t usually individual financial fraud but larger actions like cyberespionage—and from Wolff’s chapters about what numerous government, law enforcement, and private agencies and companies are doing to combat cybercrime. Her chapters on computer defense are thorough—sometimes clinically so, but always understandable.

This isn’t to say that readers should be casual about their own security. You may not have North Korea threatening you if you don’t do what they want (as Sony faced), but there could be a criminal, say, sitting right outside your hotel lobby snagging your credit card number as it flies through an inadequately secured network accessed with an unprotected or only partially-protected computer.

There is no way to make yourself completely invulnerable to cybercrime, of course, just like any crime. And Wolff’s book isn’t really a how-to manual of personal defense. Between the good and bad it portrays, the diligent bloodhounds hunting the criminals and the often stupid, preventable mistakes companies and governments have made, by the end it might not make you feel better or worse about the cybersecurity situation. But it will give you a much vaster picture of the state of that situation today. Not to mention a deeper sense that, like so many other things, some care, vigilance, and precautions could save you a lot of trouble.