New Book Blurbs and Reviews: The Lost Soul of the American Presidency

Review of Stephen F. Knott's The Lost Soul of the American Presidency 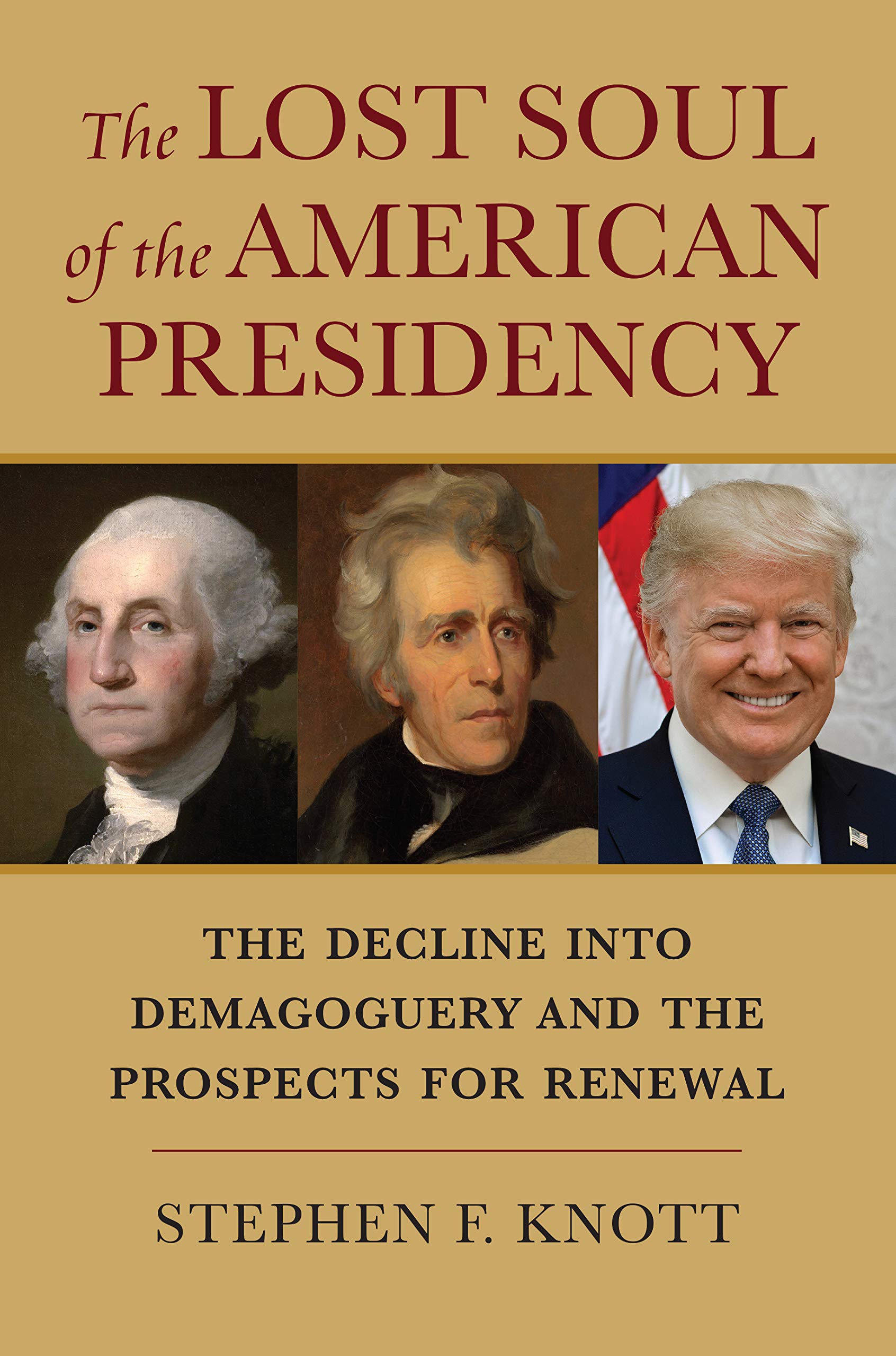 Published last year, Stephen F. Knott’s The Lost Soul of the American Presidency makes for a timely, if somewhat discouraging, read for the final days before the 2020 election—and one way or another will likely remain so afterward. The discouraging part isn’t simply due to recent events, though, but Knott’s detailed illustrations of how far back some trends we’ve seen emerging in such a big way in recent years really go. Yet he adds that while history may not give cause for optimism, the situation isn’t entirely hopeless.

Like many well-done history books examining sacred cows, Lost Soul is either going to offer up plenty to offend readers, or things they will find amazingly interesting—or both. Knott has a great deal to say, not all of it pleasant, about presidents like Jefferson, Jackson, Franklin Roosevelt, and Trump. But whatever else one can say about Knott’s take on these presidents, he adheres to historical accuracy.

Some readers may encounter another issue. For those not already thoroughly familiar with the creation of the Constitution and the early American presidency, there is one large potential hurdle in order getting through the book: the fact that the ideas of “popular rule” and a partisan presidency have become so thoroughly entrenched in American culture since the 19th century, it might be hard to accept that this isn’t what most of the Founders intended. On the other hand, it’s also a mistake to assumethat the Founders were anti-majority rule. Knott points out that what they frequently warned about were what they called “passions”—the shifting emotional waves and crests of popular opinion without logic, thoughtfulness, or careful consideration.

Their answer to this was supposed to be the office of the presidency. They envisioned the president as a chief of state above party politics (easy enough to do since parties hadn’t quite been invented yet) who would act as a national unifying force.

What we’ve come to with the presidency, of course, is something very different. But Knott insists that this is not a path we started down in recent memory. He argues that much of it began with the “experimentation” of Woodrow Wilson, but that some threads can be traced back all the way to America’ third president, Thomas Jefferson.

Not surprisingly, Knott says the one president who exemplified the original ideals of the Chief Executive was George Washington. While his presidency was not without its turmoil—at one point Philadelphia rioters demanded his removal—Washington, chief hero of the American Revolution, wasn’t just an easy figure to unify around but someone who could personally bring people together, including his own sometimes fractious cabinet. But the decline of the office started early: John Adams’ Alien and Sedition laws; Thomas Jefferson’s “Revolution of 1800” that began emphasizing the “passions” of the majority, along with starting the disenfranchisement of free blacks, in order to gather more power around his party; and the populist Andrew Jackson, who wielded the passions of the majority like a cudgel, famously battled the judiciary, and often threatened—sometimes physically—those who opposed him.  Knott also explains that it was Jackson who did the most early on to tie the presidency to class warfare when his attack against the Bank of the United States became seen as a battle between the elite and “common” Americans.

American history as outlined in Knott’s book isn’t unending decline. He harbors a great admiration for the steady hand of John Quincy Adams, a president who recognized his own inability to be charismatic and fight off constant and usually false negative attacks by his opponents; the even-handedness that Abraham Lincoln showed long before the Civil War despite originally being a Jackson appointee; the devotion to office and country by Ulysses S. Grant, whose administration’s history has long since been overshadowed by its other members’ scandals; and the attempts at more fair-mindedness (except concerning civil rights) by the now almost-forgotten William Howard Taft, who had the misfortune of being sandwiched between two presidency-expanding giants, Teddy Roosevelt and Woodrow Wilson.

What Knott does is portray not so subtly, but with intense accuracy, a system where degradation runs deeper than the good things done by the office holders, making it extremely difficult to fix. We see the demagoguery of Andrew Johnson, the truest executive ancestor of Donald Trump; Johnson’s rhetoric could reach such extremes he occasionally even made some Southerners uncomfortable despite being pro-South. Woodrow Wilson is presented as a major turning point, the culmination of the worst elements of the presidency up till then, including using “passions” as a weapon, racism (being a major civil rights-buster), enflaming class warfare, and heavy propagandizing in the case of America’s entry into World War I. Knott goes on to contrast FDR and Truman, then Eisenhower—a pinnacle in American’s 20th century trust of the presidency—with the popular and “revolutionary” Kennedy who believed making the presidency more powerful was the only way to meet the late 20th century’s challenges. From Wilson on, whatever power the Executive Branch successfully claimed for its own stayed its own. The history concludes with Donald Trump, of course, who has—as Knott puts it mildly at one point—done a lot of negative unprecedented things which would have horrified the founders, including attacking specific judges by name and threatening to imprison his opponents’ relatives, or only had precedent in the disastrous presidency of Andrew Johnson.

The final chapter, “The Prospects for Renewal” (that name also part of the book’s subtitle), is a hopeful summary, though not overly optimistic: “But if history is any guide,” Knott writes, “(Trump) could eventually be followed by Trump squared”. Like the presidency never surrendering a power it has successfully taken, norms that are broken are not easily fixed. “But this is not inevitable,” Knott adds. History is our guide for the possibilities. There is also the factor that people’s trust in government being at an all-time low is necessarily a situation Americans want. But it is noteworthy that the chapter about our prospects for staving off the presidency’s “decline and demagoguery” is the shortest in the book, at just 11 pages.

At the very least, and whether they are in favor or opposed to Knott's arguments, Lost Soul should give its readers a clear idea of just what they want the presidency to be.